Created by: CK-12/Adapted by Christine Miller

If someone asks you whether you can code, you probably assume they are referring to computer code. The image in Figure 5.6.1 represents an important code that you use all the time — but not with a computer! It’s the genetic code, and it is used by your to store information, as well as to make and .

What Is the Genetic Code?

The genetic code consists of the sequence of nitrogen bases in a polynucleotide chain of DNA or RNA. The bases are adenine (A), cytosine (C), guanine (G), and thymine (T) (or uracil, U, in RNA). The four bases make up the “letters” of the genetic code. The letters are combined in groups of three to form code “words,” called . Each codon stands for (encodes) one, unless it codes for a start or stop signal. There are 20 common amino acids in . With four bases forming three-base codons, there are 64 possible codons. This is more than enough to code for the 20 amino acids. The genetic code is shown in Figure 5.6.2.

To find the amino acid for a particular codon, find the first base in the codon in the centre of the circle in Figure 5.6.2, then the second base in the middle row out from the center, and finally the third base in the outer ring  For example, CUG codes for leucine, AAG codes for lysine, and GGG codes for glycine. Try it out: Can you figure out what the codon AGC codes for?

If you find the codon AUG in Figure 5.6.2, you will see that it codes for the amino acid methionine. This codon is also the start codon that establishes the of the code.  The start codon is a necessary tool in translation, since a single chromosome contains many genes.  In order to transcribe and translate a gene for a specific protein, we need to know where in the DNA code to start “reading” the instructions.  AUG signals the start of a reading frame.  After the AUG start codon, the next three bases are read as the second codon. The next three bases after that are read as the third codon, and so on. The sequence of bases is read, codon by codon, until a stop codon is reached. UAG, UGA, and UAA are all stop codons. They do not code for any amino acids.

The importance of the reading frame is illustrated in the hypothetical situation  below:

The section of mRNA in Figure 5.6.3 is designed to create a chain of five specific amino acids.

Characteristics of the Genetic Code

The genetic code has a number of important characteristics:

The double helix structure of  was discovered in 1953. It took just eight more years to crack the genetic code. The scientist primarily responsible for deciphering the code was American biochemist Marshall Nirenberg, who worked at the National Institutes of Health in the United States. When Nirenberg began the research in 1959, the manner in which  are synthesized in cells was not well understood, and  had not yet been discovered. At that time, scientists didn’t even know whether  or RNA was the molecule used as a template for . Nirenberg, along with a collaborator named Heinrich Matthaei, devised an ingenious experiment to determine which molecule — DNA or RNA — has this important role. They also began deciphering the genetic code.

Nirenberg and Matthaei added the contents of bacterial cells to each of 20 test tubes. The cell contents provided the necessary “machinery” for the synthesis of a polypeptide molecule. The researchers also added all 20 amino acids to the test tubes, with a different amino acid “tagged” by a radioactive element in each test tube. That way, if a polypeptide formed in a test tube, they would be able to tell which amino acid it contained. Then, they added synthetic RNA containing just one nitrogen base to all 20 test tubes. They used the base uracil in their first experiment. They discovered that an RNA chain consisting only of uracil bases produces a polypeptide chain of the amino acid phenylalanine. This experiment showed that RNA (rather than DNA) is the template for protein synthesis, but it also showed that a sequence of uracil bases codes for the amino acid phenylalanine. The year was 1961, and it was a momentous occasion. When Nirenberg presented the discovery at a scientific conference later that year, he received a standing ovation. As Nirenberg puts it, “…for the next five years I became like a scientific rock star.”

After Nirenberg and Matthaei cracked the first word of the genetic code, they used similar experiments to show that each codon consists of three bases. Before long, they had discovered the codons for all 20 amino acids. In 1968, in recognition of this important achievement, Nirenberg was named a co-winner of the Nobel Prize in Physiology or Medicine. 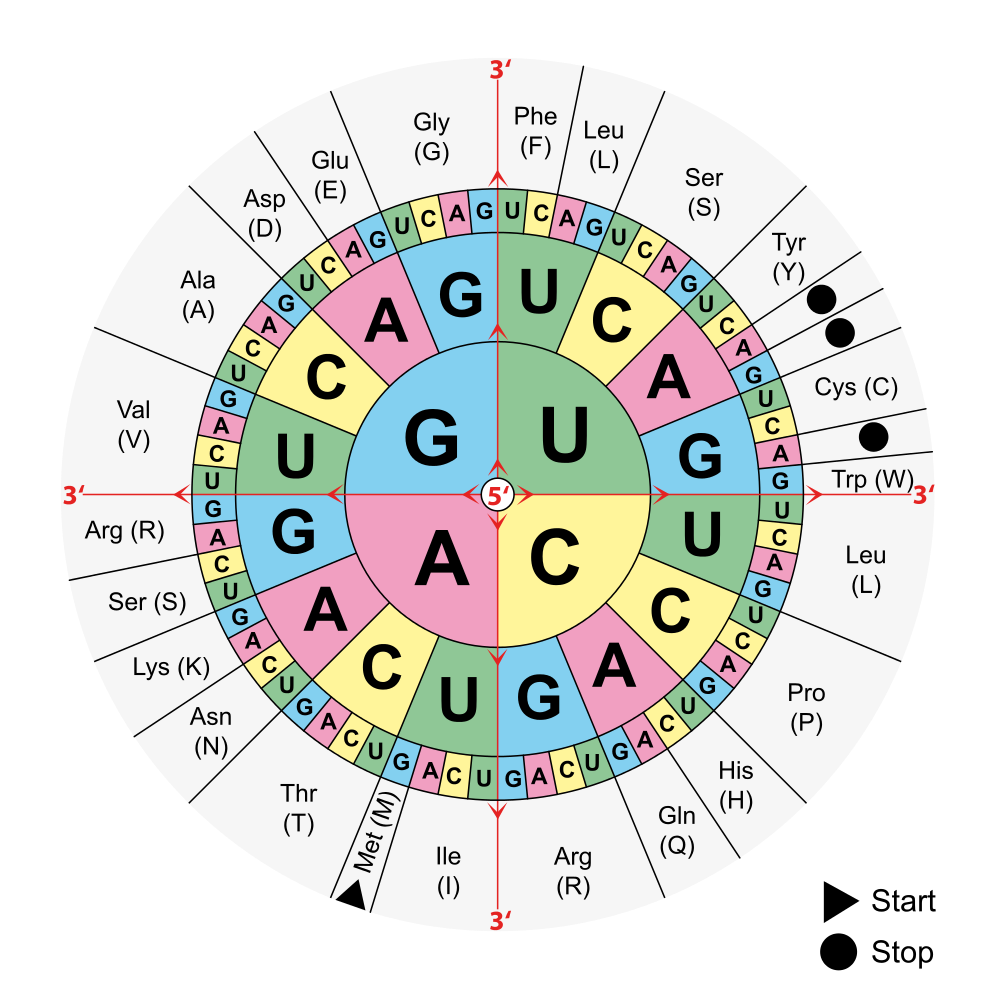 AMY1gene by unknown author from National Science Foundation on Wikimedia Commons  is released into the public domain (https://en.wikipedia.org/wiki/Public_domain).

Aminoacids table (Adapted) by Mouagip on Wikimedia Commons  is released into the public domain. (Original: Codons sun (“codesonne” in German) by Onie~commonswiki])

The smallest unit of life, consisting of at least a membrane, cytoplasm, and genetic material.

A nucleic acid of which many different kinds are now known, including messenger RNA, transfer RNA and ribosomal RNA.

The part of each hemisphere of the cerebrum that is involved in functions such as touch, reading, and arithmetic.

A sequence of 3 DNA or RNA nucleotides that corresponds with a specific amino acid or stop signal during protein synthesis.

Amino acids are organic compounds that combine to form proteins.

The specific location in DNA where a set of codons will code for a certain protein. The reading frame begins with the start codon (AUG).

Deoxyribonucleic acid - the molecule carrying genetic instructions for the development, functioning, growth and reproduction of all known organisms and many viruses.

A large family of RNA molecules that convey genetic information from DNA to the ribosome, where they specify the amino acid sequence of the protein products of gene expression.

The process of creating protein molecules.