Created by: CK-12/Adapted by Christine Miller

Drinks like this shake contain a lot of protein. Muscle tissue consists mainly of protein, so such drinks are popular with people who want to build muscle. Making up muscles is just one of a plethora of functions of this amazingly diverse class of biochemicals.

Proteins may have up to four levels of structure, from primary to quaternary.  As a result, they can have tremendous diversity. Here are some additional details about the levels of protein structure: 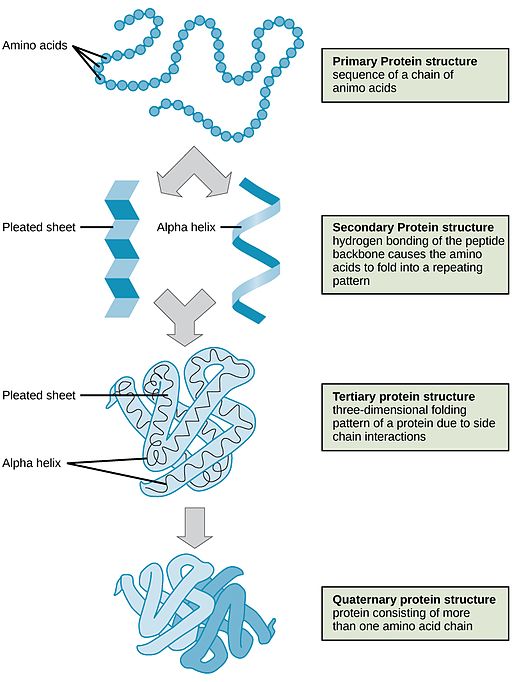 The diversity of protein structures explains why this class of biochemical compounds can play so many important roles in living things. What are the roles of proteins?

The chief characteristic of proteins that allows their diverse set of functions is their ability to bind to other molecules so specifically and tightly. Myoglobin can bind specifically and tightly with oxygen. The region of a protein responsible for binding with another molecule is known as the binding site. This site is often a depression on the molecular surface, determined largely by the tertiary structure of the protein.

are necessary in the diets of humans and other animals. We cannot make all the different we need, so we must obtain some of them from the foods we consume. In the process of digestion, we break down the proteins in food into free amino acids that can then be used to synthesize our own proteins. Protein synthesis from amino acid monomers takes place in all cells and is controlled by genes. Once new proteins are synthesized, they generally do not last very long before they are degraded and their amino acids are recycled. A protein’s lifespan in mammalian cells is generally just a day or two.

Protein Structure and Folding by The Amoeba Sisters, 2018.

Protein_shake by Sandstein, on Wikimedia Commons, is used under a CC BY 3.0 (https://creativecommons.org/licenses/by/3.0) license.

Structures of Protein by OpenStax, on Wikimedia Commons, is used under a CC BY 4.0 (https://creativecommons.org/licenses/by/4.0) license.

A class of biological molecule consisting of linked monomers of amino acids and which are the most versatile macromolecules in living systems and serve crucial functions in essentially all biological processes.

Amino acids are organic compounds that combine to form proteins.

Biological molecules that lower amount the energy required for a reaction to occur.

A chemical reaction is a process that leads to the chemical transformation of one set of chemical substances to another.

An antibody, also known as an immunoglobulin, is a large, Y-shaped protein produced mainly by plasma cells that is used by the immune system to neutralize pathogens such as pathogenic bacteria and viruses.

A molecule that can undergo polymerization, creating macromolecules. Large numbers of monomers combine to form polymers in a process called polymerization.