Created by: CK-12/Adapted by: Christine Miller

is a distinctive way of gaining knowledge about the natural world that starts with a question and then tries to answer the question using evidence and logic. It is an exciting exploration of all the whys and hows that any curious person might ask about the world. You can be part of that exploration! Besides your curiosity, all you need is a basic understanding of how scientists think and how science is done. In this concept, you’ll learn how to think like a scientist.

Thinking like a scientist rests on certain underlying assumptions. Scientists assume that: 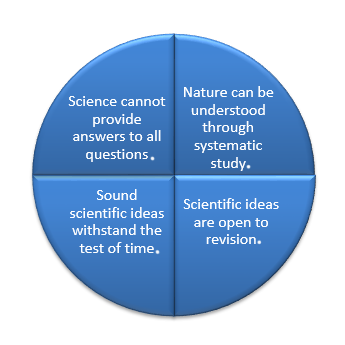 Scientists think of nature as a single system controlled by natural laws. By discovering natural laws, scientists strive to increase their understanding of the natural world. Laws of nature are expressed as scientific laws. A  is a statement that describes what always happens under certain conditions in nature.

Scientific Ideas Are Open to Change

Science is both a process and body of knowledge. Scientific knowledge is generated through systematic processes, such as  and experimentation. Scientists are always testing and revising their ideas, and as new observations are made, existing ideas may be challenged. Ideas may be replaced with new ideas that better fit the facts, but more often, existing ideas are simply revised. Through many new discoveries over time, scientists gradually build an increasingly accurate and detailed understanding of the natural world.

Scientific Knowledge May Be Long Lasting

Many scientific ideas have stood the test of time. About 200 years ago, the scientist John Dalton proposed atomic theory — the theory that all matter is made of tiny particles called atoms. This theory is still valid today. During the two centuries since the theory was first proposed, scientists have learned a lot more about atoms and the even smaller particles that compose them. Nonetheless, the idea that all matter consists of atoms remains valid. There are many other examples of basic scientific ideas that have been tested repeatedly and proven sound. You will learn about many of them as you study human biology.

Not All Questions Can be Answered by Science

rests on evidence and logic, and evidence comes from observations. Therefore, science deals only with things that can be observed. An  is anything that is detected through human senses or with instruments or measuring devices that extend human senses. Things that cannot be observed or measured by current means — such as supernatural beings or events — are outside the bounds of science. Consider these two questions about life on Earth:

The first question can be answered by science on the basis of scientific evidence (such as fossils and logical arguments). The second question could be a matter of belief, but no evidence can be gathered to support or refute it. Therefore, it is outside the realm of science.

Nature of Science with the Ameoba Sisters, 2019.

A large body of knowledge and the process by which this knowledge is obtained.

A scientific law is a statement based on repeated experimental observations that describes some aspect of the world.

Receiving knowledge of the outside world through our senses, or recording information using scientific tools and instruments.