Famed military strategist Carl von Clausewitz once quipped, “The best defense is a good offense.” We illustrate a number of key issues surrounding whether and how firms respond when put on the defensive by rivals.

In addition to choosing what moves their firm will make, executives also have to decide whether to respond to moves made by rivals (Table 6.6 “Responding to Rivals’ Moves”). Figuring out how to react, if at all, to a competitor’s move ranks among the most challenging decisions that executives must make. Research indicates that three factors determine the likelihood that a firm will respond to a competitive move: awareness, motivation, and capability. These three factors together determine the level of competition tension that exists between rivals (Table 6.7 “Competitive Tension: The A-M-C Framework”).

Bridges and rubber bands have been known to snap under too much tension. In a similar vein, firms experience competitive tension with their competitors. Three factors help to explain the likelihood that a firm will respond aggressively to rivals’ competitive actions. We explain each of these factors below.

An analysis of the “razor wars” illustrates the roles that these factors play (Ketchen, et. al., 2004). Consider Schick’s attempt to grow in the razor-system market with its introduction of the Quattro. This move was widely publicized and supported by a $120 million advertising budget. Therefore, its main competitor, Gillette, was well aware of the move. Gillette’s motivation to respond was also high. Shaving products are a vital market for Gillette, and Schick has become an increasingly formidable competitor since its acquisition by Energizer. Finally, Gillette was very capable of responding, given its vast resources and its dominant role in the industry. Because all three factors were high, a strong response was likely. Indeed, Gillette made a preemptive strike with the introduction of the Sensor 3 and Venus Devine a month before the Schick Quattro’s projected introduction.

Although examining a firm’s awareness, motivation, and capability is important, the results of a series of moves and countermoves are often difficult to predict and miscalculations can be costly. The poor response by Kmart and other retailers to Walmart’s growth in the late 1970s illustrates this point. In discussing Kmart’s parent corporation (Kresge), a stock analyst at that time wrote, “While we don’t expect Kresge to stage any massive invasion of Walmart’s existing territory, Kresge could logically act to contain Walmart’s geographical expansion.…Assuming some containment policy on Kresge’s part, Walmart could run into serious problems in the next few years.” Kmart executives also received but ignored early internal warnings about Walmart. A former member of Kmart’s board of directors lamented, “I tried to advise the company’s management of just what a serious threat I thought [Sam Walton, founder of Walmart] was. But it wasn’t until fairly recently that they took him seriously.” While the threat of Walmart growth was apparent to some observers, Kmart executives failed to respond. Competition with Walmart later drove Kmart into bankruptcy.

Executives in many markets must cope with a rapid-fire barrage of attacks from rivals, such as head-to-head advertising campaigns, price cuts, and attempts to grab key customers. If a firm is going to respond to a competitor’s move, doing so quickly is important. If there is a long delay between an attack and a response, this generally provides the attacker with an edge. For example, PepsiCo made the mistake of waiting fifteen months to copy Coca-Cola’s May 2002 introduction of Vanilla Coke. In the interim, Vanilla Coke carved out a significant market niche; 29 percent of US households had purchased the beverage by August 2003, and 90 million cases had been sold.

In contrast, fast responses tend to prevent such an edge. Pepsi’s spring 2004 announcement of a midcalorie cola introduction was quickly followed by a similar announcement by Coke, signaling that Coke would not allow this niche to be dominated by its longtime rival. Thus, as former General Electric CEO Jack Welch noted in his autobiography, success in most competitive rivalries “is less a function of grandiose predictions than it is a result of being able to respond rapidly to real changes as they occur. That’s why strategy has to be dynamic and anticipatory.”

Multipoint competition adds complexity to decisions about whether to respond to a rival’s moves. With multipoint competition, a firm faces the same rival in more than one market. Cigarette makers R. J. Reynolds (RJR) and Philip Morris, for example, square off not only in the United States but also in many countries around the world. When a firm has one or more multipoint competitors, executives must realize that a competitive move in a market can have effects not only within that market but also within others. In the early 1990s, RJR started using lower-priced cigarette brands in the United States to gain customers. Philip Morris responded in two ways. The first response was cutting prices in the United States to protect its market share. This started a price war that ultimately hurt both companies. Second, Philip Morris started building market share in Eastern Europe where RJR had been establishing a strong position. This combination of moves forced RJR to protect its market share in the United States and neglect Eastern Europe.

If rivals are able to establish mutual forbearance, then multipoint competition can help them be successful. Mutual forbearance occurs when rivals do not act aggressively because each recognizes that the other can retaliate in multiple markets. In the late 1990s, Southwest Airlines and United Airlines competed in some but not all markets. United announced plans to form a new division that would move into some of Southwest’s other routes. Southwest CEO Herb Kelleher publicly threatened to retaliate in several shared markets. United then backed down, and Southwest had no reason to attack. The result was better performance for both firms. Similarly, in hindsight, both RJR and Philip Morris probably would have been more profitable had RJR not tried to steal market share in the first place. Thus recognizing and acting on potential forbearance can lead to better performance through firms not competing away their profits, while failure to do so can be costly.

Responding to a Disruptive Innovation

When a rival introduces a disruptive innovation that conflicts with the industry’s current competitive practices, such as the emergence of online stock trading in the late 1990s, executives choose from among three main responses. First, executives may believe that the innovation will not replace established offerings entirely and thus may choose to focus on their traditional modes of business while ignoring the disruption. For example, many traditional bookstores such as Barnes & Noble did not consider book sales on Amazon to be a competitive threat until Amazon began to take market share from them. Second, a firm can counter the challenge by attacking along a different dimension. For example, Apple responded to the direct sales of cheap computers by Dell and Gateway by adding power and versatility to its products. The third possible response is to simply match the competitor’s move. Merrill Lynch, for example, confronted online trading by forming its own Internet-based unit. Here the firm risks cannibalizing its traditional business, but executives may find that their response attracts an entirely new segment of customers.

Fighting Brands: Get Ready to Rumble

A firm’s success can be undermined when a competitor tries to lure away its customers by charging lower prices for its goods or services. Such a scenario is especially scary if the quality of the competitor’s offerings is reasonably comparable to the firm’s. One possible response would be for the firm to lower its prices to prevent customers from abandoning it. This can be effective in the short term, but it creates a long-term problem. Specifically, the firm will have trouble increasing its prices back to their original level in the future because charging lower prices for a time will devalue the firm’s brand and make customers question why they should accept price increases.

The creation of a fighting brand is a move that can prevent this problem. A fighting brand is a lower-end brand that a firm introduces to try to protect the firm’s market share without damaging the firm’s existing brands. In the late 1980s, General Motors (GM) was troubled by the extent to which the sales of small, inexpensive Japanese cars were growing in the United States. GM wanted to recapture lost sales, but it did not want to harm its existing brands, such as Chevrolet, Buick, and Cadillac, by putting their names on low-end cars. GM’s solution was to sell small, inexpensive cars under a new brand: Geo.

Interestingly, several of Geo’s models were produced in joint ventures between GM and the same Japanese automakers that the Geo brand was created to fight. A sedan called the Prizm was built side by side with the Toyota Corolla by the New United Motor Manufacturing Incorporated (NUMMI), a factory co-owned by GM and Toyota. The two cars were virtually identical except for minor cosmetic differences. A smaller car (the Metro) and a compact sport utility vehicle (the Tracker) were produced by a joint venture between GM and Suzuki. By 1998, the US car market revolved around higher-quality vehicles, and the low-end Geo brand was discontinued. 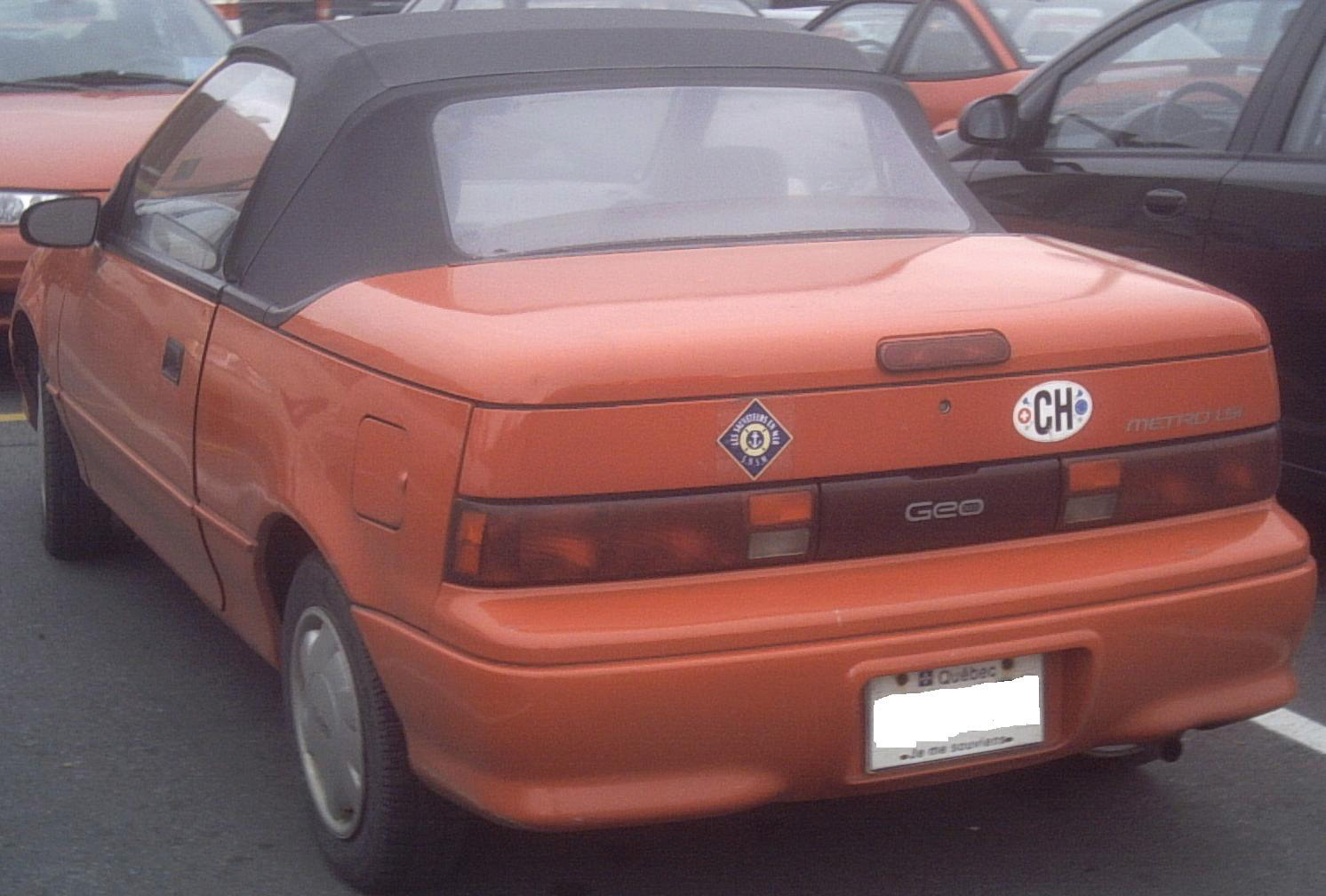 The Geo brand was known for its low price and good gas mileage, not for its styling.

Some fighting brands are rather short lived. Merck’s failed attempt to protect market share in Germany by creating a fighting brand is an example. Zocor, a treatment for high cholesterol, was set to lose its German patent in 2003. Merck tried to keep its high profit margin for Zocor intact until the patent expired as well as preparing for the inevitable competition with generic drugmakers by creating a lower-priced brand, Zocor MSD. Once the patent expired, however, the new brand was not priced low enough to keep customers from switching to generics. Merck soon abandoned the Zocor MSD brand (Ritson, 2009).

Two major airlines experienced similar futility. In response to the growing success of discount airlines such as Southwest, AirTran, Jet Blue, and Frontier, both United Airlines and Delta Airlines created fighting brands. United launched Ted in 2004 and discontinued it in 2009. Delta’s Song had an even shorter existence. It was started in 2003 and was ended in 2006. Southwest’s acquisition of AirTran in 2011 created a large airline that may make United and Delta lament that they were not able to make their own discount brands successful.

Despite these missteps, the use of fighting brands is a time-tested competitive move. For example, very successful fighting brands were launched forty years apart by Anheuser-Busch and Intel. After Anheuser-Busch increased the prices charged by its existing brands in the mid-1950s (Budweiser and Michelob), smaller brewers started gaining market share. In response, Anheuser-Busch created a lower-priced brand: Busch. The new brand won back the market share that had been lost and remains an important part of Anheuser-Busch’s brand portfolio today. In the late 1990s, silicon chipmaker Advanced Micro Devices started undercutting the prices charged by industry leader Intel. Intel responded by creating the Celeron brand of silicon chips, a brand that has preserved Intel’s market share without undermining profits. Wise strategic moves such as the creation of the Celeron brand help explain why Intel ranks thirty-second on Fortune magazine’s list of the “World’s Most Admired Corporations.” Meanwhile, Anheuser-Busch is the second most admired beverage firm, ranking behind Coca-Cola.