Skip to content
Today, employees are working harder than ever in offices and other places of employement. (Photo courtesy of Juhan Sonin/flickr) 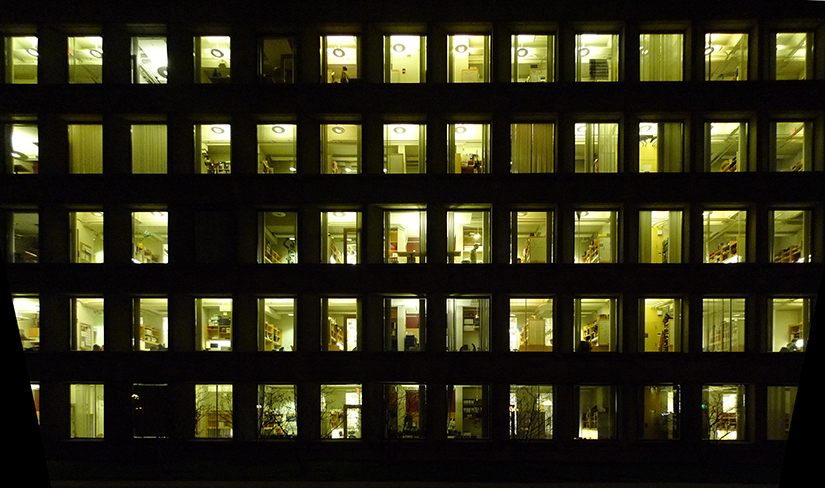 What if the U.S. economy thrived solely on basic bartering instead of its bustling agricultural and technological goods? Would you still see a busy building like the one shown in (Figure)?

In sociology, economy refers to the social institution through which a society’s resources are exchanged and managed. The earliest economies were based on trade, which is often a simple exchange in which people traded one item for another. While today’s economic activities are more complex than those early trades, the underlying goals remain the same: exchanging goods and services allows individuals to meet their needs and wants. In 1893, Émile Durkheim described what he called “mechanical” and “organic” solidarity that correlates to a society’s economy. Mechanical solidarity exists in simpler societies where social cohesion comes from sharing similar work, education, and religion. Organic solidarity arises out of the mutual interdependence created by the specialization of work. The complex U.S. economy, and the economies of other industrialized nations, meet the definition of organic solidarity. Most individuals perform a specialized task to earn money they use to trade for goods and services provided by others who perform different specialized tasks. In a simplified example, an elementary school teacher relies on farmers for food, doctors for healthcare, carpenters to build shelter, and so on. The farmers, doctors, and carpenters all rely on the teacher to educate their children. They are all dependent on each other and their work.

Economy is one of human society’s earliest social structures. Our earliest forms of writing (such as Sumerian clay tablets) were developed to record transactions, payments, and debts between merchants. As societies grow and change, so do their economies. The economy of a small farming community is very different from the economy of a large nation with advanced technology. In this chapter, we will examine different types of economic systems and how they have functioned in various societies.

Detroit, once the roaring headquarters of the country’s large and profitable automotive industry, had already been in a population decline for several decades as auto manufacturing jobs were being outsourced to other countries and foreign car brands began to take increasing portions of U.S. market share. According to State of Michigan population data (State of Michigan, n.d.), Detroit was home to approximately 1.85 million residents in 1950, which dwindled to slightly more than 700,000 in 2010 following the economic crash. The drastic reduction took its toll on the city. It is estimated that a third of the buildings in Detroit have been abandoned. The current average home price hovers around $7,000, while homes nationwide sell on average for around $200,000. The city has filed for bankruptcy, and its unemployment rate hovers around 30 percent.

The Wage Gap in the United States

The Equal Pay Act, passed by the U.S. Congress in 1963, was designed to reduce the wage gap between men and women. The act in essence required employers to pay equal wages to men and women who were performing substantially similar jobs. However, more than fifty years later, women continue to make less money than their male counterparts. According to a report released by the White House (National Equal Pay Taskforce 2013), “On average, full-time working women make just 77 cents for every dollar a man makes. This significant gap is more than a statistic—iit has real-life consequences. When women, who make up nearly half the workforce, bring home less money each day, it means they have less for the everyday needs of their families, and over a lifetime of work, far less savings for retirement.” While the Pew Research Center contends that women make 84 cents for every dollar men make, countless studies that have controlled for work experience, education, and other factors unanimously demonstrate that disparity between wages paid to men and to women still exists (Pew Research Center 2014).

As shocking as it is, the gap actually widens when we add race and ethnicity to the picture. For example, African American women make on average 64 cents for every dollar a White male makes. Latina women make 56 cents, or 44 percent less, for every dollar a White male makes. African American and Latino men also make notably less than White men. Asian Americans tend to be the only minority that earns as much as or more than White men.

In 2015, the United States continued its recovery from the “Great Recession,” arguably the worst economic downturn since the stock market collapse in 1929 and the Great Depression that ensued.

The recent recession was brought on, at least in part, by the lending practices of the early twenty-first. During this time, banks provided adjustable-rate mortgages (ARM) to customers with poor credit histories at an attractively low introductory rate. After the introductory rate expired, the interest rate on these ARM loans rose, often dramatically, creating a sizable increase in the borrower’s monthly mortgage payments. As their rates adjusted upward, many of these “subprime” mortgage customers were unable to make their monthly payments and stopped doing so, known as defaulting. The massive rate of loan defaults put a strain on the financial institutions that had made the loans, and this stress rippled throughout the entire economy and around the globe.

The United States fell into a period of high and prolonged unemployment, extreme reductions in wealth (except at the very top), stagnant wages, and loss of value in personal property (houses and land). The S&P 500 Index, which measures the overall share value of selected leading companies whose shares are traded on the stock market, fell from a high of 1565 in October 2007 to 676 by March 2009.

Today, however, unemployment rates are down in many areas of the United States, the Gross Domestic Product increased 4.6 percent in the second quarter of 2014 (US Department of Commerce–Bureau of Economic Analysis), property owners have noted a slight increase in the valuation of housing, and the stock market appears to be reinvigorated.

While these and several other factors indicate the United States is on the road to recovery, many people are still struggling. For most segments of the population, median income has not increased, and in fact it has receded in many cases. The size, income, and wealth of the middle class have been declining since the 1970s— effects that were perhaps hastened by the recession. Today, wealth is distributed inequitably at the top. Corporate profits have increased more than 141 percent, and CEO pay has risen by more than 298 percent.

G. William Domhoff (University of California at Santa Cruz) reports that “In 2010, the top 1% of households (the upper class) owned 35.4% of all privately held wealth, and the next 19% (the managerial, professional, and small business stratum) had 53.5%, which means that just 20% of the people owned a remarkable 89%, leaving only 11% of the wealth for the bottom 80% (wage and salary workers).”

Economic Impact of the Recession on Different Segments of Population: Most U.S. citizens have struggled financially as a result of the nearly decade-long recession. As noted above, many workers lost their jobs as unemployment rates soared, housing prices—which represent the wealth of the average person—declined sharply, and the cost of living increased significantly. Meanwhile income for the average U.S. worker remains stagnant.

One indicator of general economic conditions is the rate at which individuals are accessing the country’s safety net or social welfare programs. Between 2000 and 2013, the number of people relying on the Supplemental Nutrition Assistance Program (SNAP, formerly known as the “food stamp” program), climbed from 17,194,000 to more than 47,636,000. The sharpest increase paralleled the subprime mortgage crisis of 2009, with the rolls rising from 28,000,000 to more than 40,000,000 individuals receiving food assistance in a span of two years (United States Department of Agriculture 2014).

The economic downturn had a rippling effect throughout the economy. For instance, it delivered a significant blow to the once-vibrant U.S. automotive industry. While consumers found loans harder to get due to the subprime mortgage lending crisis and increasing fuel costs, they also grew weary of large, gas-guzzling sport utility vehicles (SUVs) that were once the bread-and-butter product of U.S. automakers. As customers became more aware of the environmental impact of such cars and the cost of fuel, the large SUV ceased to be the status symbol it had been during the 1990s and 2000s. It became instead a symbol of excess and waste. All these factors created the perfect storm that nearly decimated the U.S. auto industry. To prevent mass job loss, the government provided emergency loans funded by taxpayer dollars, as well as other forms of financial support, to corporations like General Motors and Chrysler. While the companies survived, the landscape of the U.S. auto industry was changed as result of the economic decline.

To realign their businesses in the face of decreased sales and lower manufacturing outputs, many large automotive companies severed their ties with hundreds of dealerships, which affected the dealers’ local economies around the country.

State of Michigan, The. n.d. “Detrioit’s Financial Crisis: What You Need to Know.” Retrieved December 15, 2014. (http://www.michigan.gov/documents/detroitcantwait/DetroitFactSheet_412909_7.pdf).

mechanical solidarity
a form of social cohesion that comes from sharing similar work, education, and religion, as might be found in simpler societies